There’s a lot of cool stuff built in the current Windows Phone 7… stuff that competing phones need to download an App for.  These are features of the Windows Phone operating system that are built-in.  You could call it “An App for That”, but it’s not something a Windows Phone user needs to spend time to find, download, and install.   (There’s something to be said that you get your choice from dozens of them on iOS and Droid.  I wonder how much time iPhone users spend figuring out which ones work well for them and which ones don’t…?)

People Hub is one of the best.  It’s so well integrated and natural that it’s easy to take for granted. (the fact that all your contacts from all your social media hubs and work contact lists are integrated by default, and you can group and manage communications among groups very easily… hard imagine not having that.)

Some of my favorite lesser known “Non-Apps” in Windows Phone involve the built in search functionality.  Hitting the handy magnifying glass that’s an identifying feature of every Windows Phone out there brings you to Bing Search.  While I’ve been an admittedly slow adopter for Bing, the features in Windows Phone’s Bing Search are awesome.

Visual Search just rocks.  Tapping the icon that looks like an eye from the search page fires up the device’s camera.  Simply point the camera in the direction of nearly *any* common, standardized barcode or QR code.   As soon as the phone “sees” the code, it will highlight it and immediately try to identify it.

At Trader Joes, and want to know a bit more about their uncrystalized candied ginger?  Scan the UPC code.  It will remind you that the small package contains about 8 servings, [so don’t eat it all at once!]  🙂   Chances are just about anything you find at any store will have a barcode, QR code, or even an MS Tag associated with it.

My favorite use for Tags, by the way, is printing Tags associated with your virtual Card on the back of classic Business Cards…  scan the Tag, and all the info on the card can be imported into your phone!  I never give out my card unless it’s Tagged. 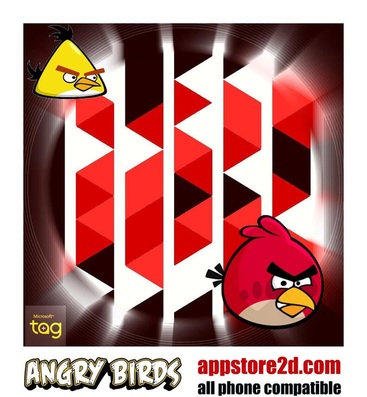 Tags can get really fancy, by the way… sometimes they’re almost hidden, and, especially out of context, it might take a moment for a human to recognize (but your phone will pick it out instantly!).  There’s a very creative cottage industry popping up around the art of Tagging things.  Exemplified by this Angry Birds Tag by Extreme2D.com. (Facebook) (and visit their site for an array of other very creative Tags!)

Visual Search does a whole slew of other awesome stuff too..  visual text identification (and TRANSLATION to foreign languages!)

Another favorite Windows Phone “Non-App” is Audio Search.  Let’s just say this is how I discover most of the music I download.  Ever out & about and hear a song that you are really taken by, but have no idea who it is?   Simply hit the music note icon in search, and let the phone listen for a moment.

I heard the 2011 remaster of Pink Floyd’s The Wall, doing cuts I’d never heard before on someone’s radio not too long ago.  It was such a fresh cut that I didn’t even believe it was actually Pink Floyd’s recording of their own song.   Upon hitting it on Audio Search, I found the tune, and the album, and immediately downloaded the whole thing!   Awesome stuff!

So this doesn’t even really scratch the surface of the stuff that you don’t need an App for with Windows Phone.   It’s like that old spaghetti sauce commercial…  “It’s in there!”

What are your favorite built in (#NonApp) Windows Phone features?

0 thoughts on “My Favorite “Non-Apps” for Windows Phone 7”