I stopped by my local AT&T store today [Saturday, July 27, 2013] (the corporate store at the Mall of NH in Manchester) to check out the Lumia 1020.  I’d heard lots about it so I was pretty psyched…  I already have (and love) my Lumia 920… it was released back in December, so it hasn’t been a year yet.  No real hope of upgrading just yet, but being a founding member of the NH Windows Phone Users Group, I take the supposed obligation to checked it out, as I did with Verizon’s 928, and T-Mobile’s 925.    🙂

I know the competition between mobile devices is a bit hot, despite the decline in popularity of iPhones, the non-restart of the Blackberry, the fragmentation of the Android, and the slow rise of the Windows Phone, but I never thought the competition might be this hot until today…  I came to hypothesize that there might be sales reps who, for whatever reason, have their favorites, and possibly….  just maybe… feel threatened by devices that rival them.

Walking into the store, I was really happy to see the Lumia 1020 display…. they had a yellow and a black unit out.

Getting closer, I had to second guess myself that these were actually 1020’s.  They looked much like my 920, and these units looked… worn…  like they’d been on display since… December of the year before.   The yellow unit was powered on, at the start screen.  The black unit was off.  Both had been scratched pretty heavily, especially at the point where the security device attached to the face of the display…. (hindering some of the UI, I noticed… the search button was fully obscured.)  especially the black one.   Given how tough the surface is… I can only imagine that someone spent some time working at scratching up the unit.   (If you examine the image below carefully at full resolution, you can just about make out the scratches… I wasn’t able to spend a lot of time taking the picture with my 920’s great-but-not-1020-awesome camera…. but they’re there.)

I ignored the scratches for the time being… these were brand spanking new units that clearly almost no customers had been shown in the less than 24 hours since it was unboxed and put on the shelf.  I was just excited to see the 1020.

The unit powered itself off almost as quickly as I fired up the camera.

No…  this unit is not charging.  It has this big honkin’ lit-up security device attached to it, but that’s not providing any power to the Lumia.   Someone had failed to provide power to the devices;  they were on the factory charge and had run dead.  Yes, batteries on both Lumia’s were dead as doornails.

A rep finally approached me, and asked if he could help.   I asked him if we could please get some power to these Lumia 1020’s so that I could take a look at them.   After a few minutes, the rep returned with the power cords (as seen attached to the USB ports in the image, below.)

I waited several minutes for the devices to charge enough for the power to come back on, and played with them for a few moments.   There was a box on the left of the display bay designed to allow you to take a picture of a picture within it, simulating various lighting conditions.  It wasn’t much more than a simple box, but it was misassembled, and the point of it was lost unless you read a bit.

I enjoyed playing with the camera a bit, taking a few different photos, and experimenting with the new zoom gestures & such… and was duly impressed with it.   It was also lighter than my 920, and I found myself wishing I could just bite the bullet and upgrade.  🙂

Most Windows Phone devices, I’ve noticed, when put on display, get set up with demo accounts so you can download apps from the app store and try them out.  I often like to see how my apps behave on newer devices.  Neither of these units were set up with connectivity… no cellular, no Wi-Fi.

The final bit that really got me thinking about how someone at this store might really feel threatened somehow by the Lumia 1020 was because I realized, as I looked around the store….  no other unit in the store had a big honkin security device obscuring part of the UI as both these 1020’s did.   The security devices for every other unit in the store was entirely attached to the back of the devices with nothing else on the faces of them…  so it felt like someone spent time to fit these particular devices with these old security rigs that they used that also damaged the devices and hindered any demos…

Really, I’m a big Windows Phone fan and Nokia Lumia fan, but this display was almost enough to make me think AT&T doesn’t want folks to see this as the flagship upgrade in the Windows Phone lineup.   In any case, I don’t think I’ll send friends & family to that store to check them out.

So my only problem with my hypothesis…  why, really, might a rep at a mobile store want to sabotage their own products?   Could they really feel the 1020’s a threat to… iPhone?  Android?   Any other hypotheses on that level?

[Edit: 7/30:  I got a response from this… (Surprised… unexpected… humbled… but appreciated!)   If I understand it correctly, the suboptimal demo experience was officially deemed “accidental”, and the units have been replaced…  and so have the security devices… so that the demo experience will be as it should be… and I’ll be happy to recommend to friends & family to go to the AT&T store & check the 1020 out.  🙂   ] 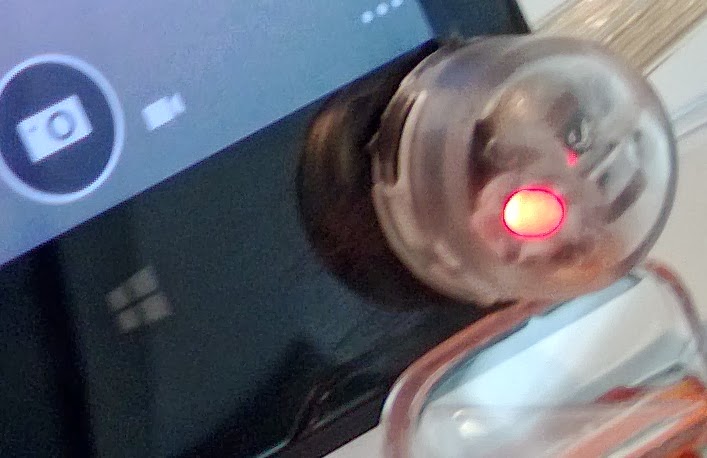